Many assertions have been made regarding Woodburn’s role as a safe haven for escaped slaves traveling north. The likely basis for this local legend comes from George Alfred Townsend’s “The Entailed Hat,” a novel written in 1884. This book includes a scene where a band of kidnappers, associated with Patty Cannon, captures escaped slaves who take refuge at what is referred to as “the Cowgill House.” The description of the house in the novel bears many similarities to Woodburn, which was owned by the Cowgill family at the time the novel was written. 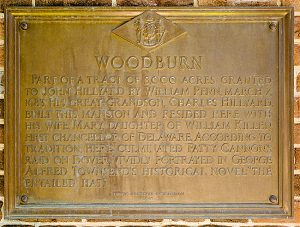 Wording on Plaque:
Part of a tract of 3000 acres granted to John Hillyard by William Penn, March 7, 1683. His great-grandson, Charles Hillyard, built this mansion and resided here with his wife, Mary, daughter of William Killen, first Chancellor of Delaware. According to tradition, here culminated Patty Cannon’s raid on Dover, vividly portrayed in George Alfred Townsend’s historical novel “The Entailed Hat.”